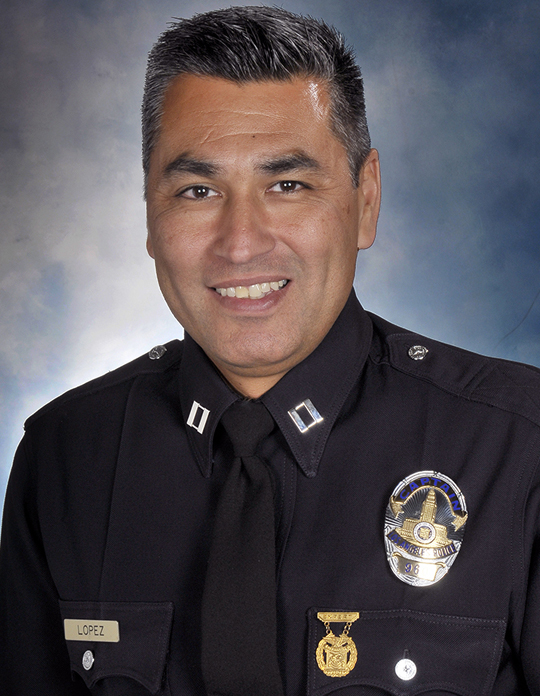 Captain III Alfonso Lopez is the commanding officer of Commercial Crimes Division (CCD). He assumed command of this division in 2022.

Captain Al Lopez was born and raised in the City of Los Angeles. He grew up in the Northeast and Hollenbeck Areas of Los Angeles, where he attended Benjamin Franklin High School. He continued his education at Sonoma State University and earned a Criminal Justice Administration degree.

Lopez was appointed to the Los Angeles Police Department in 1991. As a police officer, he worked Hollywood Central and Rampart Areas, and Metropolitan Division. He had been assigned to gangs and vice and has also been an element/equestrian member. In 2001, he became a Sergeant and, in this capacity, worked Southwest, Northeast and Olympic Areas as well as Internal Affairs Group. As a member of the Olympic Transition Team, Lopez was responsible for the creation of the 20th Community Police Station.

Lopez is a graduate of the Los Angeles Police Department West Point Leadership Program, the Sherman Block Supervisory Leadership Institute, and the Los Angeles Police Department Command Development Course. He is a member of the Latin American Law Enforcement Association and the Command Officers Association. He has been the recipient of the Meritorious Unit Citation and the Police Medal.

Captain Lopez is married to his wife Mary, and they have recently celebrated their 27th year wedding anniversary. In his personal time, Lopez enjoys spending quality time with his family, coaching soccer, running, camping and traveling.