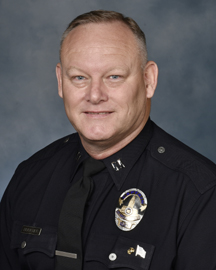 Captain Jeff Bratcher was promoted to the Rank of Captain in July 2021. He is a 31-year veteran of the Los Angeles Police Department and is currently the Commanding Officer, Juvenile Division.

Captain Bratcher was born in Hermosa Beach, California and raised in the South Bay. After serving honorable as a rifleman in the United States Marine Corps, he was appointed to the LAPD in 1989.

His patrol assignments included Harbor and Pacific Divisions. He also served as a gang officer in Operations-West Bureau Community Resources Against Street Hoodlums (C.R.A.S.H.) and Harbor C.R.A.SH., where he was instrumental in obtaining injunctions against two notorious street gangs. While working for the LAPD, he earned his Associate of Arts degree from the Los Angeles City College in Administration of Justice. He then earned his Bachelor of Arts degree in Occupational Studies -Vocational Arts. He earned a Master’s Degree in Leadership from the University of Southern California.

Captain Bratcher was promoted to Police Sergeant in 1999 and served as a patrol supervisor in Wilshire, Jail Division, Transit Rail Division and Harbor Division. He was promoted to Detective in 2006 and served at South Traffic Division. In 2008, he was selected to be a criminal investigator at Internal Affairs Division. In 2011, he was selected and served as the Office-in-Charge of the Officer Representation Section, representing his fellow officers during Department investigations and at Administrative Hearings.

As a Lieutenant, Captain Bratcher returned to Harbor Division and served as a Watch Commander. Due to a dramatic increase in violent crime in South Los Angeles in 2016, he was selected to serve as the Deputy Incident Commander of the Community Safety Operations Center. There Captain Bratcher oversaw real-time crime tracking and the deployment of hundreds of officers in Southeast, 77th Street, Southwest and Newton Areas. In that role, Captain Bratcher was instrumental in building the Operations-South Bureau Community Safety (OSB) Operations Center and command post which was used as the model for the entire City of Los Angeles. He helped build the Federal Bureau of Investigation and the Bureau of Alcohol, Tobacco, Firearms and Explosives Task Forces in operation in OSB, as well as expanding the Department’s use of the National Ballistic Information Network which is instrumental in the Department’s shooting investigations. His final assignment as a Lieutenant was as the Commanding Officer, 77th Street Detectives.