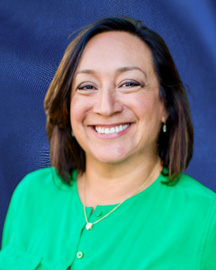 Maria “Lou” Calanche, is the Founder and Executive Director of Legacy LA, a youth development organization providing at-risk youth living in the Ramona Gardens community of Boyle Heights with the tools and resources needed to help them reach their full  potential. Returning to her community in 2007, Lou founded Legacy LA with the goal to develop young leaders and to address the long history of violence and drugs that plagued her community of Ramona Gardens for decades.

Lou’s commitment to her community  started as an idea and has grown to a successful nonprofit serving over 300 youth annually. She also led a $4 million capital campaign and renovation of a former federal armory to establish what is now a state-of-the-art community youth development center.

As the Executive Director of Legacy LA, Lou ensures that youth are provided with resources and support they need to succeed and is also committed to her values and beliefs that young people must lead change in their communities. She believes that young people have the capacity to lead. However, youth are seldom given the opportunity to have a voice in shaping policy or government systems, yet they are expected to thrive in these systems. At Legacy LA, youth are provided with leadership development and opportunities to address problems in their community and Los Angeles County.

Legacy LA youth leaders are engaged and leading environmental justice campaigns and have successfully advocated for inclusion in the City’s Clean Up, Green Up Program, a City policy prohibiting certain industrial uses from being situated in proximity to residential areas, and secured $400,000 in funding from South Coast Air Quality and Management District to install an air filtration system at the local elementary school. Ramona Gardens is categorized as one of the communities with the poorest air quality in the State and Legacy LA youth are leading an innovative effort to build a  natural park with air pollution mitigation systems along the 12-lane highway that abuts the public housing development.

Lou’s commitment to youth leadership and to engage young people to prepare them to lead systems and policy change has been key to the success of the Invest in Youth Campaign. Legacy LA has led a citywide coalition that is advocating for the creation of the City of Los Angeles’ first Youth Development Department. Los Angeles is the only large City in the nation that doesn’t have a dedicated department focused on youth. Lou ensures that youth are at the forefront of developing campaign goals and values, has worked on developing a City of Los Angeles budget that prioritizes youth, and is grounded in the belief that young people have to be included in all decision making.

Lou’s commitment to ensure that young people are given leadership roles along with her ability to engage them in learning campaign strategy and organizing has helped to secure key wins for the campaign to create a Youth Development Department in Los Angeles. In March 2019, Lou recently celebrated the passing of a City Council motion to establish a City of Los Angeles Task Force on Youth  Development tasked with developing a youth development strategy for the City.

Lou has been a community leader in East Los Angeles for more than two decades and leverages her background and experience to  ensure Legacy LA’s success. Prior to committing full time to Legacy LA, she was a Political Science professor at East Los Angeles  Community College. Other key roles in Lou’s trajectory include serving as a Council Deputy for City of Los Angeles Councilmember Richard Alatorre, the Director of Community Outreach for the University of Southern California Health Sciences Campus, and has  also served on several community nonprofit boards and City of Los Angeles Commissions including El Pueblo de Los Angeles  Historical Park and the City’s Housing Authority.

Lou has an undergraduate degree from Loyola Marymount University, Master of Public Administration Degree from University of Southern California where she is also a Doctoral Candidate focusing her research on land-use policy and citizen participation.