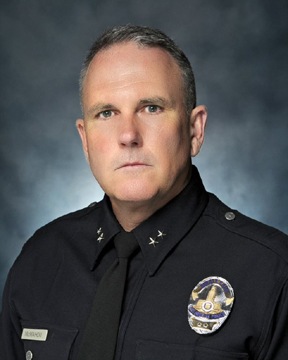 Deputy Chief John McMahon is a 33-year veteran of the Los Angeles Police Department, with expertise in the areas of law enforcement technology, uses of force and counterterrorism.

As Commanding Officer of the Information Technology Bureau, Deputy Chief McMahon oversees the strategic development and implementation of a multiple-year, comprehensive project to update and modernize the Department. Among a number of related, impactful initiatives, he has shaped key organizational changes and technology-based solutions that have significantly reduced police officer-involved shootings during that time.

Day to day, Deputy Chief McMahon leads technology operations that support the needs of individual officers in the field, as well as the Department as a whole. He is responsible for the four divisions that comprise the Information Technology Bureau: Application Development and Support; Emergency Command Control Communications Systems; Information Technology; and, Innovation Management.

Born and raised in Simi Valley, California, Deputy Chief McMahon was inspired by his father, a veteran of WWII, to join the Los Angeles Police Department in 1989. Rising through the ranks, he promoted to Sergeant in 1996. Noteworthy assignments included Field Supervisor and Assistant Watch Commander, Wilshire Area; special assignment from the Chief of Police to supervise the staff responsible for preparing Department orders and directives related to policies and procedures; and, assignment to Internal Affairs as a member of the Rampart Corruption Task Force.

In 2001, Deputy Chief McMahon promoted to Lieutenant, with a series of assignments that laid the groundwork for his specialized knowledge in the areas of use of force and counterterrorism. Under his leadership, the Violent Crime Task Force received widespread recognition for their exceptional productivity, with multiple high-profile arrests and firearms and narcotics seizures. Subsequent appointments included Officer-in-Charge of the Gang Impact Team at Central Area and Adjutant to the Commanding Officer of the Counterterrorism and Special Operations Bureau and its five divisions: Metropolitan, Major Crimes, Air Support, Emergency Operations and Emergency Services.

Following his promotion to Captain in 2013, Deputy Chief McMahon was appointed Commanding Officer of the Use of Force Review Division, where he guided and oversaw the internal review of thousands of use of force investigations. His subject-matter expertise was influential in leading to the Department-wide adoption of tactical de-escalation concepts, along with developing protocols for individuals armed with weapons other than firearms and the inclusion of body-worn video evidence during investigations into uses of force. It was during this time that Deputy Chief McMahon originated and published what is now recognized as the Nation’s premier annual report on law enforcement use of force statistics.

Deputy Chief McMahon leads, and innovates, with a philosophy of continuous quality improvement through continuous exchanges of knowledge. He received a Bachelor of Arts degree in Business Administration from the University of La Verne and is a graduate of both the West Point Leadership Academy and the Executive Leadership Program at USC’s Sol Price School of Public Policy. Deputy Chief McMahon is an active member of the Technology Committee of the International Association of Chiefs of Police, The National Tactical Officers Association and is certified by the Force Science Institute as an Advanced Force Specialist. Owing to his depth of experience, he consults to other agencies and addresses various organizations locally, regionally and nationally.