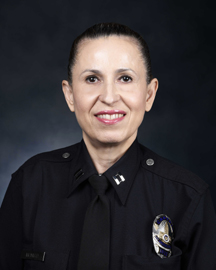 Captain Sonia Monico was born in Mexico and raised in Southern California. She holds a Bachelor of Science Degree in Criminal Justice Management from Union Institute and University, and a Master’s Degree in Public Administration and Leadership from California State University Northridge.

Sonia joined the Los Angeles Police Department in April 1993. As a police officer, Sonia worked as a Patrol Officer, Field Training Officer, and as a Senior Lead Officer where she served the community of Panorama City and Sherman Oaks.

Sonia promoted to Lieutenant in October 2012. As a Lieutenant, she worked as Patrol Watch Commander, Assistant Detective Commanding Officer, and the adjutant for Deputy Chief Regina Scott, Operations-Central Bureau.

Sonia holds California POST Certificates for the Basic, Advanced, Supervisory, and Management levels. Sonia also graduated from the Sherman block Supervisory Leadership Institute, the Federal Bureau of Investigation National Academy (FABINA) and is a graduate of the Los Angeles Police Department’s Command Development School. She is a member of several law enforcement associations, which include the International Chiefs of Police and the FBI National Academy Associates.

Sonia is married and has one daughter. In her spare time, Sonia enjoys spending time with her family and running.