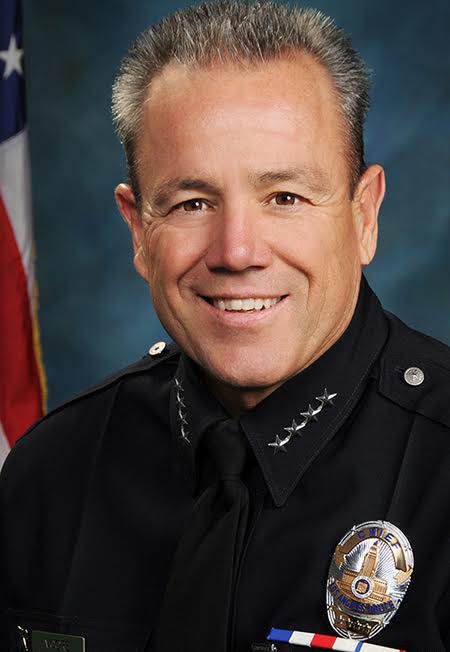 Chief Moore rose through the ranks of police officer, detective, sergeant, and lieutenant working various patrol, investigative, and administrative assignments throughout the City. Chief Moore promoted to the rank of Captain in 1998 and his assignments included assuming command at Rampart Area following the arrest of Rafael Perez and during the 2000 Democratic National Convention. Upon his promotion to Commander in 2002, his assignments were at Operations-Valley Bureau and later the Assistant to the Director, Office of Operations. In 2004, he was promoted to Deputy Chief and assumed the command of Operations-West Bureau, later transferring to Operations-Valley Bureau in 2005.

In 2010, he promoted to Assistant Chief and was assigned as Director, Office of Special Operations. In that position, Chief Moore oversaw Detective Bureau and Counter-Terrorism and Special Operations Bureau, as well as Citywide Jail, Property and Security Services Operations. In 2015, Chief Moore was assigned as Director, Office of Administrative Services. In that position, he oversaw the Department’s fiscal, personnel, training and various support operations including the Department’s command center, communications and records management. He was also the Chair of the Department’s Use of Force Review Board which evaluates all Categorical Uses of Force, including deadly force and hospitalizations.

In 2016, he was promoted to First Assistant Chief and was assigned as Director, Office of Operations. In that position, he oversaw the Department’s geographic bureaus and patrol divisions which provide uniformed and investigative services within the City of Los Angeles. In addition, Chief Moore directed the Department’s COMPSTAT process, including weekly command inspections.

On June 27, 2018, Michel R. Moore was sworn in by the Los Angeles Mayor Eric Garcetti as the 57th Chief of Police of the City of Los Angeles.

During his time as the Chief of police, Chief Moore has implemented effective crime fighting initiatives, institutionalized the Community Safety Partnership model, focused heavily on community engagement, and ensured the on-going modernization of the Department’s technology; all while guiding the men and women of this organization through the challenges of a global pandemic.

Chief Moore attended the University of Redlands, completing a Bachelor of Science in Business and Management in 1993 and a Masters of Business Administration in 1999. He is also a graduate of the Police Executive Research Forum, the Senior Management Institute for Police, the Supervisory Leadership Institute, and the West Point Leadership program. Chief Moore has completed advanced coursework in emergency management, counter-terrorism, and process improvement. He has received numerous commendations and awards for his police service including the Department’s Medal of Valor, the Police Medal, the Police Star, and the Meritorious Service Medal.