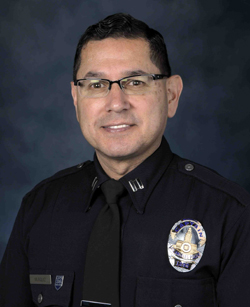 Captain Richard Musquiz was born in the City of Los Angeles and raised in Los Angeles County. He received his Bachelor of Arts Degree in Criminal Justice from Chapman University and his Associate of Arts Degree in Administration of Justice from East Los Angeles Community College. In 1974 He became a law enforcement explorer with the Bell Gardens Police Department and later transferred to the Huntington Park Police Department, which led him to a productive career in law enforcement.

He has over 29 years’ experience in law enforcement, starting his career in 1981 with the City of Huntington Park Police Department, in addition he worked for Cerritos Community College Campus Police, Compton School Police, Los Angeles County Office of Public Safety, Housing Authority Police of the City of Los Angeles and General Services Office of Public Safety. He embraces the principles of community based policing/problem solving and working with stakeholders to develop solutions to issues facing the City and community.

He worked a variety of assignments in in his career, such as Patrol Officer, Community Resource Officer, Field Training Officer, Sergeant and Lieutenant in Patrol Field Operations, Detectives and Administration. In Command positions, he managed patrol operations, administration, support services, professional standards, communications and records division.

Captain Musquiz was appointed to the Los Angeles Police Department (LAPD) in January 2013 when the Department of General Services Office of Public Safety was consolidated into the Police Department as the Security Services Division. Captain Musquiz is the Assistant Commanding Officer for the Security Services Division, which is comprised of three sections: the Civic Operations Section, Special Operations Section and the Administrative Section.

The Civic Operations Section of the Division provides security services to City municipal sites, including the Civic Center Complex, as well as the largest city park in Los Angeles; Griffith Park. The Special Operations Section accounts for the security operations for the Los Angeles Zoo, the Bureau of Sanitation and the Library Department. In addition, the Special Operations Section includes the Senior Lead Officer and the Parking Lot Closure Units. The Administrative Section consists of the Complaint, Training, Technology, Special Events, IOD/Sick Coordinator, and Contract Security Units.