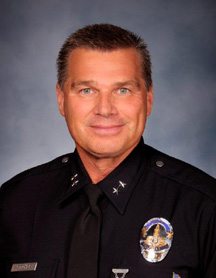 Deputy Chief Kris Pitcher has been employed by the Los Angeles Police Department for the last 30 years and is currently assigned as the Commanding Officer, Operations-Valley Bureau where he has responsibility over all patrol, detective and specialized unit  operations, personnel, budgetary and community engagement efforts in the San Fernando Valley and represents the Bureau at Police Commission and before the City Council.

Prior to his promotion, he was assigned as the Assistant to the Director, Office of Operations, Assistant Commanding Officer, Operations-Valley Bureau, and the commanding officer of the Department’s Force Investigation Division where he directed the investigative efforts of all officer involved shootings, in custody deaths and UOF incidents resulting in the hospitalization of the suspect(s). Additionally, he was responsible for the development and implementation of investigative policy and protocol, training,
and liaison with the District Attorney, Federal Monitor and the Inspector General, and the review and approval of all of its’ investigative products during the time the Los Angeles Police Department was under a Federal Consent Decree. He continues to remain engaged in the development of force-related policy and protocols.

Deputy Chief Pitcher has reviewed, approved and consulted on thousands of non-lethal, less-lethal and lethal UOF investigations, cases and matters during his time as a command and staff officer with the Los Angeles Police Department, and during his time as a
UOF consultant with law enforcement agencies across the country. He has provided UOF investigation and review instruction to numerous police and sheriff’s departments around the nation, and has spoken at the IACP Annual Conference, numerous UOF conferences and summits and continues to speak at UOF conferences around the country.

Deputy Chief Pitcher also serves as a Litigative Consultant for the U.S. Department of Justice’s Civil Rights Division, Special Litigation Section, where he has reviewed hundreds of UOF cases and their subsequent adjudications for constitutionality, reasonableness, proportionality, necessity and policy compliance during the agency’s investigation of what is known as pattern-or practice cases.

He has also provided training and consultation on effective force investigations and review systems to several law enforcement agencies subject to Federal Consent Decrees. In addition to his work with the U.S. DOJ, he serves as a police practices expert working closely with a major law firm on the west coast, representing several major sheriff’s departments in police litigation/civil liability matters.