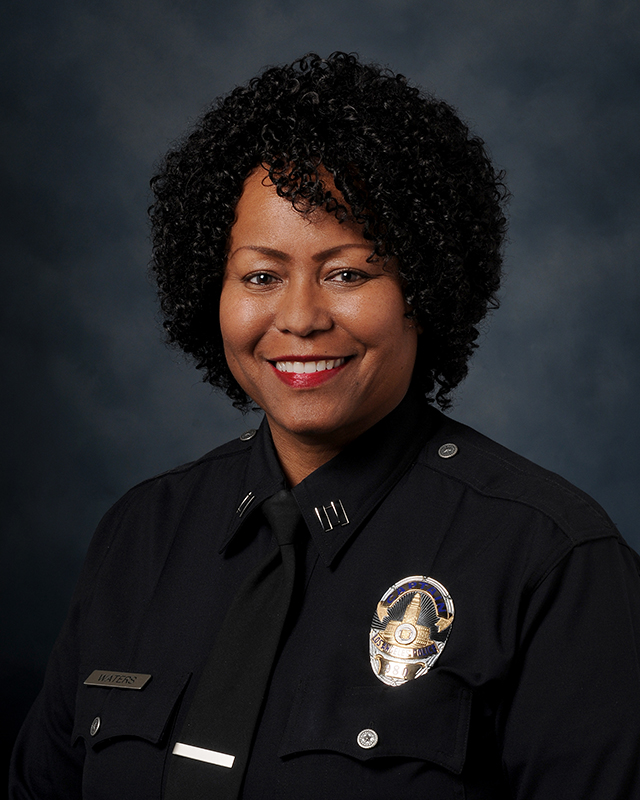 Captain Chris Waters was born and raised in Los Angeles, California. She was introduced to the Department as an (LAPD) Explorer (now known as Cadets) and later entered the Police Academy September 12, 1988.

Captain Waters has worked a variety of assignments and locations including Patrol, Central Traffic, Detectives, Vice, Office of Operations and Civil Rights Integrity Division-CRID and Internal Affairs to name a few. She has had the distinction of being the Adjutant to three Deputy Chiefs while assigned to Operations-South Bureau. She has been a Watch Commander, Vice Officer-in-Charge (OIC), Homicide Detective and the Commanding Officer of Commission Investigation Division (CID). The CID the regulatory arm of the Police Commission.

In her spare time Captain Waters reads, volunteers her time in her church and community. She is a past member of the Executive Board of Directors for Challengers Boys and Girls Club, and Association of Black Law Enforcement Executives. She is the current President of the Southern California Chapter of National Organization of Black Law Enforcement Executives, and an active member of other employee organizations such as: OJB, LA-LEY, LAPOWA, PERF [ACP, and FBINA].

Captain Waters is the proud mother of one adult son, who also has a career in law enforcement.