In 1994, a collection of California plein air paintings was reported stolen from a storage facility in West Los Angeles where the collection was being assembled for a museum exhibit. One of the paintings was by artist Harold Harrington Betts. A photograph of the recently acquired artwork showed it to be a landscape depicting Half Dome in Yosemite. A photo and description of the painting were placed on the LAPD website.

Ten years later, an Illinois art collector named Angelo, 82-years old, decided to do some research on a painting in his collection. He had acquired it in 1994 from an art dealer in West Virginia. It was signed “H.H. Betts.” Angelo was unfamiliar with using the internet to research art so a family member demonstrated how by using the Betts painting as an example. However, when they checked on the painting, they learned it was stolen. When Angelo compared his painting with an image on the LAPD website, they were almost exactly the same – except for one important difference.

Angelo contacted LAPD’s Art Theft Detail and arrangements were made to ship the painting to Los Angeles. When detectives viewed the painting and compared it with a photo of the one stolen, they noted that both had the same image of Half Dome with the same cloud formations in the background and the same hill in the foreground containing a single pine tree. However, Angelo’s painting contained the figures of five people who were on the hill. 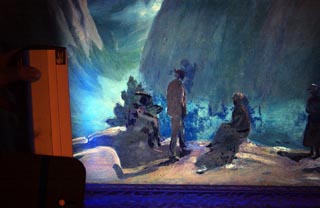 Now detectives had to determine if this was the same painting. If so, where did the people come from dressed in early 20th century garb who were now gazing at Half Dome in the distance? Was this an attempt to disguise a stolen artwork? Or perhaps an arrogant effort to improve upon the original?

A close inspection of the painting revealed that it was, in fact, the one reported stolen. Aside from the figures, every detail of the two images was the same. Scientific Investigation Division laboratory personnel made an overlay of the two images that exactly superimposed on each other. An examination of Angelo’s painting under ultraviolet light revealed evidence of heavy restoration work around each of the figures. Detectives also noted a long shadow on the hill that didn’t appear to be caused by anything in the original photo without figures. However, in Angelo’s painting, a man standing on the hill is obviously causing the shadow.

Learning about the history of the painting also helped. The Betts painting had been owned by the Santa Fe Railroad in Chicago. During the early days of the railroad, some artists bartered their art for services on the railroad. Many pieces of art decorated train station waiting rooms. Years later, Santa Fe decided to deaccession part of its art collection. Many of the artworks were in poor condition. The Betts painting fell into this category. Over the years, the bottom portion of the painting where the figures were displayed had become damaged. In order to make the painting saleable, a hasty paint touch-up was performed. Rather than going to the expense of restoring the delicate figures, someone merely painted them out so that they became part of the Yosemite landscape behind them. This is substantiated by a fragment of old backing paper still adhering to the frame on which someone had written “remove figures in foreground.”

After Betts’ original figures had been obliterated, the painting was then purchased by the victim of the theft who was not aware of its original condition. However, some time after it was stolen, someone took an interest in the painting and invested the time and expense to have it professionally restored and the canvas restretched.

In this case, the painting came back in much better shape than when it was stolen.