During a burglary of a home in West Los Angeles, thieves took a Persian rug, Russian icons, and artworks by Simeon Solomon, Marino Marini, and George Inness. Inness, an American landscape artist, created Sunset at Milton in 1885. When it was stolen, it was valued at $30,000. There were few clues to act upon, although the rug was later recovered when a shadowy figure sold it to a Persian rug store in Los Angeles. 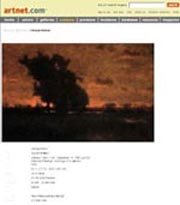 Nine years later, information on the Inness painting finally surfaced when an art internet company called ARTNET.COM posted a photo and information on the painting. It had sold at auction through Sotheby’s in New York. Although the statute of limitations had long since lapsed to prosecute the burglar if identified, the painting still belonged to the victim. The investigation revealed that although the painting was stolen in California and then sold in New York, it was purchased by a good faith buyer back in California – about 125 miles from the original burglary location.