The new registrar at UCLA glanced at a painting hanging on the wall outside his office and disapproved. It appeared to be dark and dingy and had been used as decorative art to spruce up the secretary’s reception area for decades. One retired office worker remembered it there since the 1940s. There were holes in it as if someone had once thrown darts at it or pierced it with a pencil. The registrar decided to move the painting somewhere else.

A counselor took an interest in the painting. Although it needed cleaning and repair, he thought it was a beautiful artwork and often mused on its history. He offered to move the painting to his office but when he got it there, the large painting did not fit the cramped space so he took it home where he began a ten-year odyssey of researching the provenance of the piece. He learned that the university had lost track of the painting’s origin. It was not even listed on inventory sheets listing office furniture and filing cabinets although it had old markings on the back showing it to be university property. The counselor’s research revealed the artist to be Arthur Wesley Dow, a well-regarded American artist whose works have been exhibited at the Smithsonian and have hung in museums. The title of the landscape was “Frost Flowers, Ipswich 1889” depicting a field of flowers with trees in the background. While he conducted his research, the counselor informed his supervisor, Jane Crawford, of his findings and concluded that the painting was worth a great deal of money. 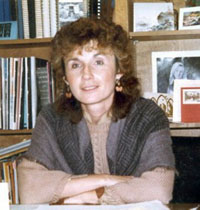 When the counselor retired from UCLA he dutifully brought the Dow painting back to the campus, knowing it was university property. Soon afterward, the painting suddenly appeared on the wall of Crawford’s office. However, the painting disappeared one day. Crawford told coworkers that she was having it cleaned and restored, but it never returned.

Crawford had actually taken the painting home. She misrepresented the painting as a family heirloom owned by her father and asked two part-time workers, Ken and Dean, to find a buyer for the painting. Dean was an artist who had ties to the art world. They contacted an agent who sold the painting to the Ira Spanierman Gallery in New York for $200,000. Spanierman had the painting cleaned and restored and sold it to a buyer for $317,000. Crawford also asked Dean if he could paint an exact replica of the painting, stating it was for her son. However, she planned to return the copy to her office to make people believe it was the newly restored original. Crawford laundered the money obtained from the sale of the Dow, so that her name was not on any of the transaction papers. The money was deposited to a bank account controlled by Ken and Dean and she had an attorney draft paperwork listing the painting as the property of her invalid father. To throw off suspicion, she made Ken her business manager in charge of her finances, telling him she needed to handle the sale of the painting in this manner for tax purposes.

For awhile, it was the perfect crime. Crawford bought a new house with the money and lived extravagantly. But eventually, the money ran out. Crawford next concocted a scheme to steal more paintings from UCLA. She noticed that at Murphy Hall where she worked, there were a number of paintings decorating the offices that were originally endowed to the university. She targeted eight artworks including ones by Roy Lichtenstein and Edgar Ewing. She took photographs of these artworks and asked Ken and Dean to use their art contacts to find buyers, stating the pieces belonged to her father. She again asked Dean to make exact copies of each piece, intending to switch the originals with copies without arousing suspicion.

However, the scheme almost came unraveled while Ken and Dean were trying to research one of the artworks by contacting Edgar Ewing for more information. The artist knew the painting had belonged to author Irving Stone. The artist had even written a dedication to the author and his wife on the painting. He contacted Mrs Stone who had given the artwork to UCLA. She, in turn, complained to the university that someone was trying to sell the donated artwork. Crawford was questioned about the incident but she denied photographing the artwork that was still hanging in her office. The university concluded that it was a false alarm but moved the art out of Crawford’s office as a precaution.

An agitated Crawford advised Ken and Dean to discontinue any efforts to sell the photographed art. They now had their suspicions confirmed that Crawford had been using them as unwitting dupes to fence stolen UCLA property. However, they were dependent upon Crawford for their livelihood, so they remained silent.

Ken and Dean subsequently contacted the Art Theft Detail and reported their suspicions that the Arthur Wesley Dow painting was stolen from UCLA. An investigation was initiated lasting over seven months – often fraught with frustrations for the art detectives. UCLA could not determine how or when they obtained the Dow painting which would help establish the painting as their property. The Spanierman Gallery initially stonewalled the investigation, refusing to cooperate with detectives to determine whether the gallery had purchased a stolen painting. After agreeing to prosecute the case, it took the U.S. Attorney’s Office over three years to indict Jane Crawford, during which two key witnesses died of natural causes before giving testimony.

However, these difficulties were finally resolved. A diligent search of UCLA archives located proof that the Dow family had donated the painting to the university in 1928. After a stiff court battle, Spanierman Gallery was finally compelled to produce the painting and relevant documentation through federal grand jury subpoenas.