In 1973, a major theft occurred at the Natural History Museum in Exposition Park. The stolen items included African artifacts, Indian jewelry, and a collection of rare Navajo blankets from the William Randolph Hearst Collection that was donated to the museum in 1942. The original investigation resulted in the arrest of Eric Manier, a security guard at the museum, who sold many of the stolen blankets to a dealer in San Francisco. However, most of the loot, valued at more than $1 million, is still outstanding.

Twenty-eight years later, the Art Theft Detail learned that a curator of Indian art in Denver had spotted two of the stolen blankets that were part of an exhibition at a museum in St. Louis. The investigation revealed the blankets had been on loan to the museum from a collection of Navajo weavings owned by a celebrity entertainer. The entertainer was a bona fide purchaser who bought the blankets many years ago from a dealer. 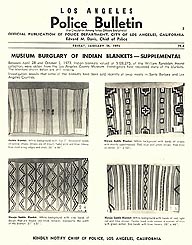 This case illustrates two points that victims should keep in mind. First, art is one of the best categories of property to ultimately recover – even many years later. Second, victims should get their own copies of police reports and keep them in a safe place to prove that the theft was reported to the police. Police departments do not warehouse old crime reports forever.

There was almost no remnant of the original criminal investigation in existence from three decades ago. The detective who conducted the investigation had retired and the crime reports had been archived for a certain amount of time and then destroyed. The absence of this documentation would have made it far more difficult to recover the stolen property. However, the museum still maintained a file containing its own copies of some

of the original police reports and bulletins. This, along with excellent photographs and descriptions of the stolen blankets, were the tools needed to prove the property was stolen. Since a thief cannot transfer good title to another, the blankets were ultimately recovered and returned to the Natural History Museum.

These handmade textiles from the 1870s included a chief’s shoulder blanket and a striped wearing blanket. They are now valued at $185,000.