When the neatly dressed man and woman drove up to the UCLA/Armand Hammer Museum in a Mercedes and entered the art rental gallery, there was nothing to alert the manager that anything was wrong. The couple selected thousands of dollars in art to rent. The woman produced a driver’s license and a credit card in the name of Hanit Peretz and filled out a rental agreement. The couple then disappeared with the art – never to be seen again. After spending more than a year and a half trying to locate the art and the suspects, the museum contacted the Art Theft Detail.

During an investigation lasting over a year, the detectives uncovered a pattern of fraud facilitated by the use of phony names, businesses and anonymous mail drop addresses. The detectives finally uncovered the true identity of the suspect, Nureet Granott, 49, who had assumed the identity of her sister living in Israel during the commission of several crimes. During the museum theft she had used a fraudulent credit card and gave fictitious rental information. The Mercedes she drove had been obtained through a fraudulent lease application. Granott committed a number of the crimes accompanied by her husband, David Yehuda Cohen, 33. Both listed their occupations as real estate agents. 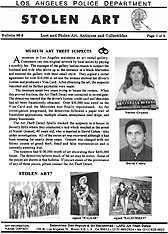 The suspects were tracked to a fashionable residence in Beverly Hills. One of their personalized car license plates was “EARN BIG” (but should have been “STEAL BIG”). During a search of the house, the stolen art was found hanging on the walls – three years after the original theft. There was also evidence of other swindles, both large and small, from real estate scams and offshore bank account inquiries under fictitious names to defrauding service providers and merchants. Detectives read a letter written by the suspects to a veterinary hospital disputing a $1,240 bill, stating they did not own a pug puppy. Looking down, the officers noted a pug puppy nipping at their heels during the search.

Detectives saw $100,000 in additional artworks decorating the house but none had been reported stolen. All of this art was photographed and was included in an art bulletin along with photos of the suspects and their method of operation. The art bulletin was distributed to art dealers, galleries, museums, auction houses, etc. in an effort to try to find additional victims and to identify stolen art in possession of the suspects.

One of these bulletins went to the L.A. County Museum of Art (LACMA) where the manager of the art rental gallery read the bulletin and recognized Granott and Cohen as the same suspects who had stolen art from LACMA in exactly the same manner and during the same time period as the UCLA/Armand Hammer Museum theft. In addition, the manager recognized several of the artworks depicted in the bulletin as ones taken from LACMA. However, the manager decided not to make a crime report or contact the police department with these observations.

Months later, the Art Theft Detail finally became aware of this crime through an artist who stumbled upon one of the art bulletins and recognized a stolen artwork as his. He contacted the detectives and informed them of the LACMA theft. As a result of this, the detectives were able to recover all six original artworks taken from the museum ngs/ell as over $7,000 in restitution for lost rental fees.

Nureet Granott was arrested and pled guilty to four counts of grand theft.