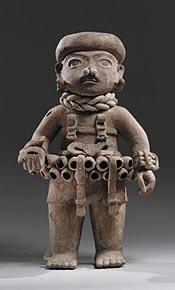 In 1977, a couple who owned a world-class collection of art returned to their Brentwood home one evening and discovered it burglarized. Many unique pieces of pre-Columbian and African art were taken along with jewelry and cash. The total loss was $102,000.

The couple not only reported the crime to the police, they also took a proactive approach to recovering their art by distributing their own crime alert flyer and reporting the theft to the Art Loss Register. The case was also covered in the news media.

Twenty-five years later, an employee at the Art 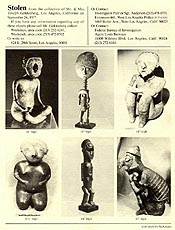 Loss Register located one of the artworks while conducting a routine check of art consigned to Sotheby’s in New York. It was a pre-Columbian terra cotta sculpture over 1000 years old from Veracruz, Mexico. It was expected to bring $30,000 at auction.

The Art Theft Detail soon discovered a second stolen sculpture offered for sale in New York by the same consignor – a doctor in Sacramento. Detectives flew to Sacramento and interviewed the doctor who turned out to be a bona fide purchaser of the art. In fact, he still had two additional pieces of the loot at his home. 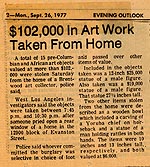 The detectives were surprised to learn that he had been in possession of the art for over 24 years which meant that he was sold the stolen art soon after the burglary. He bought some of the art from a rare book dealer named Herbert Caplan who owned a book store in San Francisco called Argus Books. He also bought some of the pieces from an associate of Caplan’s who operated an antique shop near Polk Street and Geary Blvd.

Herbert Caplan died in 1986. His widow, Jacqueline Caplan, was located in Sacramento. Detectives learned that she had six additional pieces of the stolen loot that her husband had acquired around the time of the theft. How Herbert Caplan and the antique dealer obtained the art remains a mystery.

Detectives have recovered ten of the stolen pieces. Together, they are now worth $218,000. The four remaining artworks are still outstanding. They include:

The case again illustrates the importance of maintaining good personal records of artwork – both before and after a theft occurs. The police department no longer had any of the paperwork related to the 25-year old case and the original detectives had long since retired. The Art Theft Detail did not exist at the time of the crime. Detectives needed to verify that the crime had indeed been reported to police in 1977 before attempting to recover the property.

Luckily, the victims were able to provide this information. They produced a copy of a flyer that they distributed containing the names of the detectives first assigned to the case as well as the unique identification number on the crime report. With this information, detectives were able to locate an old LAPD bulletin about the crime by conducting a hand search of archived materials. The victims also saved newspaper clippings from the initial press coverage describing the crime and they still had photos and detailed descriptions of the artwork taken. This included dated handwritten notes showing the art belonged to the victims at the time of the crime. In addition, they had registered the stolen art with the Art Loss Register which was able to corroborate the victims’ due diligence efforts.

Good recordkeeping on the part of the victims made it much easier for detectives to recover the stolen property and ultimately return it to the true owners.