After her son’s death at a young age in 1995, Lisa Wagner made a determined effort to acquire art he had created as an artist. She learned he had made thirteen original artworks for Bullock’s department store in Westwood where he worked as an interior designer. She began a lengthy process of writing letters, making phone calls and visiting corporate executives to get permission to obtain this art.

During some of these visits, Lisa, who is 67, was sometimes accompanied

by a woman named Ophie Beltran, who had known the son and represented herself as a family friend. Lisa often became emotional at the memory of her son so Beltran comforted and assisted Lisa during her efforts to acquire the art.

Months later, Lisa finally obtained permission to pick up the art. However, when she showed up, she learned that Beltran had arrived the day before and taken possession of the art which was released to her under the mistaken belief that she was acting on Lisa’s behalf. Both Lisa and store employees contacted Beltran to inform her the art had been intended for Lisa. However, Beltran refused to return any of the art which was later appraised at over $52,000. The police officer taking the crime report also called Beltran and advised her to return

The Art Theft Detail assumed investigative responsibility for the case and served a search warrant on Beltran’s home in Sylmar. But Beltran, anticipating police intervention, had already hidden the art and would not reveal its location. The detectives saw empty hooks and spaces on the walls where the art had been hanging 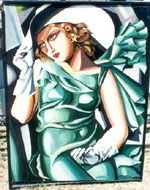 . Beltran, who had once run for California state senator, was subsequently arrested for grand theft and jailed.

Happily for Lisa Wagner, Beltran finally agreed to reveal the location of Lisa’s art when she was confronted by a jury trial on a charge punishable by state prison. The Art Theft Detail recovered the art from a cargo container and delivered it to Lisa who proudly displays her son’s art on the walls of her home.