Dr. Jane Werner, a collector, consultant and scholar of Tibetan art, had amassed a world class collection of Tibetan and Nepalese artifacts at her home in New York. She was also the founder and director of the Tibetan Cultural Institute.

On Christmas Day, Werner returned home from festivities to discover that her home had been burglarized. Most of her antiquities collection had been stolen including over 200 of her best pieces, some dating to the 8th Century.

It had all the earmarks of an inside job. There was no forced entry and no ransacking. The burglar appeared to have intimate knowledge of the art and the home. Dr. Werner began to suspect a young man named Craig Kenneth Warner who had recently entered

her life when he presented himself as a student of Tibetan Buddhism who was interested in starting his own collection of Tibetan art. He often visited Dr. Werner and did odd jobs for her which would have given him the opportunity to duplicate her keys. Craig was one of the few people who knew that Werner would be away for Christmas. He was one of the first persons to call Werner after the burglary to offer his sympathy for her loss.

New York Police detectives interviewed Craig and asked him to take a polygraph examination, but he refused. Shortly thereafter, he disappeared from the New York area.

Eleven years later, LAPD’s Art Theft Detail received information that Craig might be living in the Los Angeles area. His name was listed as a member of a local Tibetan cultural organization. None of the stolen property had ever surfaced.

Detectives found a possible address for Craig through Department of Motor Vehicle records. He was now 40 years old. They also learned he had a couple of arrest warrants for traffic offenses. They decided to drive to L.A.’s Wilshire district to pay Craig a visit.

When the art detectives arrived at the Plymouth Boulevard address, they knocked at the front door of the nondescript house. The frightened face of an old woman appeared at a tiny viewing window in the door. Detectives learned that Mary, over 80-years old, was the owner of the house. However, the detectives were stymied in their investigation because Mary refused to open the door. Mary was shown police identification and badges with no effect. She appeared confused and uncomprehending. A friend and neighbor also tried to convince Mary to open the door, without success. The neighbor expressed concern for Mary’s welfare since Craig Warner had moved in. 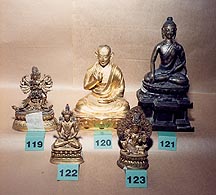 While the detectives were outside, Craig suddenly pulled up to the house in a car. Detectives told him they wanted to check to see whether Mary was all right. When they finally stepped through the front door, they were confronted by two memorable sights. First, they spotted many of the stolen Tibetan pieces displayed in a bookcase in the front room. Whatever passion drove Craig to steal these rare pieces many years ago had long since ebbed. They now appeared forgotten and forlorn, covered in dust with many pieces chipped and broken.

The second sight (and smell) that caught the detectives’ attention was a group of pot-bellied pigs rooting around in a makeshift pen in the dining room. There was hay and dirt on the floor and large numbers of flies buzzing throughout the house. The stench from the urine and feces soaked house repeatedly drove the detectives out of the house to gulp fresh air.

Mary, a frail retired school teacher with diminished capacity, was in an adjoining bedroom. Detectives soon learned that Craig, who did not work, somehow came upon Mary who lived alone. He quickly took control of her home and her meager retirement funds. She had to depend upon him for all the necessities of life including food and medical care. By engaging in elder fiduciary abuse, Craig was able to pursue harebrained investment schemes at Mary’s expense. One “investment” plan was to raise pot-bellied pigs inside Mary’s home. Detectives walked into Mary’s garage and discovered that Craig had turned it into a rare bird aviary, filled with squawking tropical birds – again at Mary’s expense. Not surprisingly, Craig had failed to make any money from these animals.

Craig lived in a room over the garage. Upon entering the room, the detectives noted that almost all available floor space was covered with pornographic magazines.

The detectives located more of the stolen Tibetan art in drawers in the house as well as in two footlockers in the trunk of Craig’s car. The loot included sculptures, tapestries, paintings, and jewelry valued at $1 million. In fact, detectives recovered the vast majority of the items taken in the burglary. It appeared that Craig had stolen the art as a trophy – to possess something rare and valuable that he coveted when Dr. Werner showed him her unique collection that had taken her a lifetime to assemble and study.

Trophy cases are some of the most difficult to solve. Detectives rely upon a thief’s greed which usually causes the art to surface at some point when the art is sold. However, if the stolen loot remains squirreled away amongst the thief’s personal possessions, the opportunity to detect the art is greatly diminished.

A bewildered pair of Animal Regulation officers arrived at the scene to take custody of Craig’s zoo animals. A county social worker was summoned to look after Mary. She was examined by a doctor who recommended that she be immediately hospitalized.

Like other thieves who, under the guise of friendship, betray those who trust them, Craig Warner tended to rationalize his behavior. He claimed Dr. Werner sold him some of the art. He denied looting Mary’s bank account, claiming she would share in his prosperity once the pig and bird business returned a profit. Craig showed no remorse for victimizing those who called him friend.

Craig Warner was arrested and prosecuted for receiving stolen property. He died as a result of various medical problems before he could go to trial.