Los Angeles: The Los Angeles Police Department’s Robbery Homicide Division detectives are investigating a robbery that occurred near the area of 6th Street and La Brea Avenue. The response of officers resulted in the arrest of two suspects.

On November 26, 2022, at 12:31 p.m., LAPD Wilshire Division officers received the report of a robbery at 6th Street and La Brea Avenue. The response of patrol officers to the scene led to a pursuit of the suspects, who fled in a vehicle.

The suspect driver collided with an unrelated vehicle, resulting in minor injuries to that driver and one of the robbery suspects, who was taken into custody at scene. The second suspect fled that traffic collision on foot and entered another waiting vehicle, which also fled from the scene.

A second pursuit of that vehicle was initiated, and the robbery suspect fled on foot from that vehicle. The second suspect vehicle and driver eluded pursuit, but the initial robbery suspect was contained in a perimeter and later located by LAPD Metropolitan Division K9 officers.

A gun was recovered from the suspects during their arrest, also recovered was the victim’s Rolex watch. 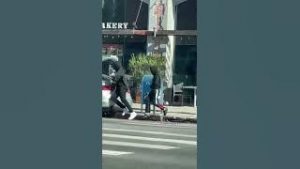 ***Video footage of the incident can be found on http://www.lapdonline.org/ ***

The case is in its early stages and the case will be presented to the Los Angeles District Attorney’s office for filing consideration in the coming days.

The crime is being investigated by detectives assigned to the Follow Home Task Force out of LAPD Robbery-Homicide Division, which was created by Chief Michel Moore in November of 2021 in order to address the increases in violent robberies which had a similar pattern, where unsuspecting victims were robbed of expensive watches or jewelry items when returning home from dining or entertainment, mostly from the Hollywood or Wilshire Areas of Los Angeles.

The two suspects that were arrested are Tyler Dumas, a 20-year-old resident of Los Angeles and Edwin Witty, a 19-year-old resident of Los Angeles. Dumas (Booking No. 6508333) was booked for one count of California Penal Code (P.C.) 211 P.C. – Robbery, with $1,000,000 Bail. Witty (Booking No. 6508336) was booked for one count of 211 P.C. – Robbery with a bail of $1,000,000. It is believed that both may be wanted for other robberies in the Los Angeles Area. Anyone with information related to this or any other follow-home robbery is urged to call Robbery Homicide Division’s Detective Jennifer Hammer at (213) 486-6840. During non-business hours, or on weekends, calls should be directed to 1-877-LAPD-24-7 (877-527-3247). Anyone wishing to remain anonymous should call the LA Regional Crime Stoppers at 1-800-222-TIPS (800-222-8477) or go directly to www.lacrimestoppers.org. Tipsters may also visit www.lapdonline.org, and click on “Anonymous Web Tips” under the “Get Involved-Crime Stoppers” menu to submit an online tip. Lastly, tipsters may also download the “P3 Tips” mobile application and select the LA Regional Crime Stoppers as their local program.