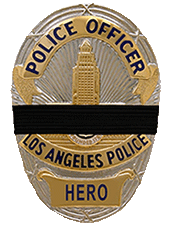 Officer Arthur Lloyd Davenport was born on November 10, 1891 in Wilcox, Nebraska, to Charles E. Davenport and his wife Sarah Jane Davenport. Arthur was one of six children born to the couple. Arthur’s father worked as a drayman in Oneida, Nebraska when Arthur was a boy. By 1920, Arthur found work as a machinist before joining his brother Thomas Davenport in Los Angeles, Ca.

Arthur Davenport was appointed to the Department on June 1, 1923. On May 16, 1926, Officer Davenport was working patrol assigned to the Lincoln Heights Police Station when he was involved in the pursuit of a drunk driver. Davenport’s partner, F. L. Hartzell, was driving the police vehicle on that fateful Sunday. The other driver, Joe Lomansney , had fled the scene of an earlier traffic collision when he was spotted by the officers in today’s Hollywood Division. As Hartzell and Davenport attempted to initiate a traffic stop at the intersection of Hollywood Boulevard and Vine Street, Lomansney rammed their vehicle causing it to overturn. Davenport was killed instantly while Hartzell sustained serious injuries. Lomansney then fled southbound on Vine Street in his vehicle, before surrendering five days later. He was ultimately charged with manslaughter. Officer Davenport’s body was transported by train to his hometown of Wilcox, Nebraska where he was laid to rest. He was survived by his mother, Sara Jane Davenport and several siblings.