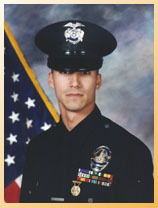 Officer Brown was shot and killed during a gunfight after witnessing a drive-by shooting. Officer Brown and his partner witnessed the shooting, in which one person was killed, and began to chase the suspects. The suspects opened fire on the two officers, striking Officer Brown in the head and grazing his partner.

Officer Brown had been with the Department for four years and is survived by his 7-year-old son.