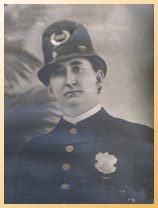 On June 7, 1911, the Los Angeles Police Department was still reeling following the murder of Patrolman Arthur B. Crusey, nearly two weeks before. Still, the annual inspection and parade had gone forward as officers sported for the first time their new olive green summer uniforms. Tragically, the department would suffer its second loss in two weeks when Patrolman Cecil S. Bowman was killed during the early evening hours of June 8, 1911.

Patrolman Bowman was very tall for his day, standing 6’3″, while presenting a formidable physique. He was born around 1876 in Lewiston, Maine, where he was raised by his father Frances whose wife died while Cecil was still a boy. On Christmas Eve 1901, the twenty four-year-old Bowman married a widow named Mary Fletcher and adopted her eleven-year-old son Percy David. The boy suffered from curvature of the spine which left him disabled. Like his father before him, Bowman ran a hotel in Augusta for several years until the Bowman family departed for Los Angeles in 1906.

In Los Angeles, Cecil worked a variety of jobs including that of private officer for the renowned Pinkerton detective agency, in the city of Arcadia. On June 9, 1909, Cecil Bowman joined the Los Angeles Police Department. By 1910, Bowman lived with his wife and son, along with his father Frances and stepmother at 1000 East Thirty-Second Street.

Patrolman Bowman’s foot beat was in the area of Macy Street (now Cesar Chavez Avenue). In Bowman’s day, Macy Street ended just north of today’s Union Station, due west of Avila Street. The area was largely industrial with railroad lines snaking their way in northerly and southern directions. Handheld radios and even car radios were still in the distant future. Officers called in to their station from a call box every few hours to report on their activity. Bowman’s call box was at the corner of Cesar Chavez (Macy Street) and Keller Street, which borders the eastside of today’s Piper Tech building.

Bowman began his late PM watch shift at 6:30 PM and reported to the area of Macy Street and the Santa Fe tracks. At approximately 8:30 PM, Bowman was crossing the tracks when he allowed a street car to pass. As the street car cleared Bowman’s position, Bowman continued onto the tracks apparently unaware of a southbound Santa Fe freight train. The freight struck Bowman squarely, then dragged his mangled body several hundred feet.

A railroad employee telephoned Central Station to report the death of an unidentified patrolman. The on duty watch commander dispatched Sergeant Daniel Long to investigate. Upon arriving to the scene, Sergeant Long gazed upon Bowman’s lifeless body and noted his star shaped badge still pinned to his uniform. The badge bore the number 217. At this point, Long positively identified Cecil S. Bowman as the deceased patrolman.

Patrolman Bowman was 32-years-old at the time of his death. He left behind his wife Mary, son Percy, father Frances and stepmother. He was buried for a time at Angelus-Rosedale Cemetary, located at 1831 West Washington Boulevard, Los Angeles, before his body was returned to his home state of Maine.