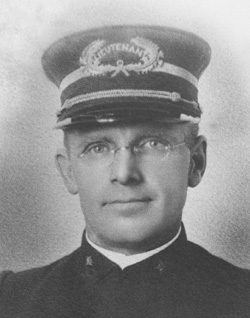 In November 1917, Europe was entrenched in the first world war. Locally, Grand Central Market was in its first year of existence. Frederick T. Woodman was in his second year as mayor of Los Angeles. John L. Butler was Chief of Police for the Los Angeles Police Department. The old Central Station, built in 1896, had been around a mere twenty-one years. It was then located at 314 West First Street, along the southeast corner of First and Broadway streets, just west of today’s Parker Center. Morning watch, which ran from 2:00 a.m. to 10:00 a.m. was run by Lieutenant Charles E. Johnson.

Johnson was born in Jackson, Michigan on January 3, 1877, to Russell and Maria Johnson. The elder Johnson worked as a telegraph operator during Charles’ youth. On February 15, 1898, the U.S.S. Maine exploded in Santiago, Cuba, sparking United States entrance into the Spanish American War. At the age of twenty-one, Charles volunteered and eventually served with the Signal Corps, Battery A, 3rd Artillery of the U.S. Army. Before the war was over, Charles was decorated for conspicuous bravery on the battlefield.

By 1900, Charles and his wife Clara, lived in San Francisco where Johnson was stationed with the U.S. Army. Later when young Charles left the military, he worked briefly as an express messenger for Wells Fargo. On January 30, 1904, soon after his twenty-seventh birthday, Charles E. Johnson answered the call to public service and became a Los Angeles Police officer.

Charles distinguished himself rising quickly through the ranks, making sergeant within five years of joining the department. He made lieutenant in July 1914. By then, Charles had been decorated for bravery by Chief Butler. Johnson saved the lives of approximately twenty people during a fire at the Occidental Hotel, located at 428 South Hill Street. Johnson entered the hotel and dragged out several occupants to safety. As the fire raged in the building, Johnson and Sergeant Henry Toomey braved the heat and pried off a security grating from one of the windows of the hotel, allowing several waiters to flee and escape the lapping flames.

The ebullient Johnson had even acted in several silent movies playing a patrolman of all things. It was not uncommon for officers then as now, to work out in the police station to stay in shape. Charles apparently liked staying in shape and it was this activity that led to his untimely death at the age of 40. As Johnson boxed with a sergeant in the roll call room (assembly room) of Central Station, a jail inmate was busy scrubbing the floors. Tragically, Charles slipped on the wet floor, falling back and striking his head. He suffered a severe skull fracture to the back of his head and was rendered unconscious. He was immediately taken across the street to Receiving Hospital, but efforts by the police surgeon to save Johnson’s life proved futile.

Charles E. Johnson died at 10:00 p.m. on the evening of November 13, 1917. Johnson was survived by his 39 year old wife Clara and two children including a daughter Charlotte. According to historical accounts, his widow received a $50 a month pension along with a one-time $1000 stipend.