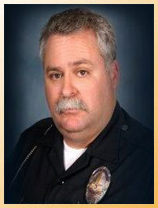 Officer Cortijo was born on August 13, 1962, in Torrance, California. He was raised in a variety of cities including Torrance, Simi Valley and North Hollywood. As a young boy, he took up surfing and fit the mold of the Southern California lifestyle including driving a Volkswagen bug.

Officer Cortijo was well respected and had a decorated career receiving more than 120 commendations for his significant contributions including teamwork, professionalism, dedication, integrity, acceptance of responsibility and personal pride. Above and beyond those accolades, Officer Cortijo was honored as employee of the year both in 2002 and recently in 2013, when he was publicly recognized for making 171 DUI arrests during the course of the year. He has dedicated himself to protecting others and keeping the community safe. In doing so, Officer Cortijo was responsible for the arrest and apprehension of more than 3,000 DUI drivers. This is a true testament to his commitment to public service.

Officer Cortijo was well recognized for his involvement and success in the coordination and management of the San Fernando Valley DUI Checkpoints. In addition, he has been influential in the continued success of receiving grant funding for future operations.

It is with great sorrow that we say goodbye to a brother, described by his friends and family as a good man with a big heart, who selflessly dedicated his life to protecting others and saving lives. Those who knew him, will always remember that proud and distinct smile he wore when speaking about his son.

Officer Cortijo patrolled the streets of the San Fernando Valley, which encompasses the area south of Foothill Boulevard to Mulholland Pass and between Valley Circle and Lowell Avenue, approximately 244 square miles.