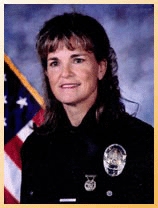 Officer Hamilton was shot and killed after being ambushed by a juvenile boy armed with an AR-15 rifle. The boy had just killed his father and called the police. When Officer Hamilton and her partner arrived, he opened fire from an ambush position. One round struck Officer Hamilton in the armhole of her vest, causing a fatal wound. The suspect committed suicide after firing upon the officers.

Officer Hamilton had only been with the Department for three months. She is survived by her two children, parents, brother, sister, nieces and nephews.