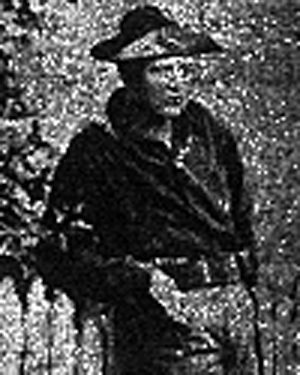 At the onset of 1907, San Francisco, California’s largest city, reeled and struggled to recover from the cataclysmic April 18, 1906 earthquake. Los Angeles meanwhile, was still a modest city with a population of around 275,000. However, the reverberation of the devastating earthquake would soon be felt as displaced Japanese residents, would flee the devastation of San Francisco and migrate to Los Angeles, altering the landscape and enhancing the culture of the soon to burgeon city of angels. Theodore Roosevelt was president of the United States and forty-five states comprised the union.

Clyde A. May, a Los Angeles Police Department patrolman and Spanish American War veteran would marry his fiancÃ© Dolly L. Shepardson, on January 3, 1907. The couple lived at 2139 Â½ South Los Angeles Street, in today’s Newton Division. Tragically, in less than two months, Clyde A. May would become the first Los Angeles police officer to be killed in the line of duty, when he died on February 28, 1907, following a shootout with a burglary suspect.

Clyde A. May was born in April 1879 in Olive, Michigan to Frank and Clara May. Frank was a farmer, like his father before him, while his wife Clarrie, kept house. The couple had three sons, Ora, Clyde and Charles H. May. Unfortunately for the May family, Frank, the family patriarch died before 1900.

On February 15, 1898, the U.S.S. Maine mysteriously exploded in Havana harbor resulting in 266 U.S. deaths. Within two months, the United States declared war on Spain. With this declaration, thousands of young men enlisted, including Theodore Roosevelt, who was then Assistant Secretary of the Navy. Like so many others, Clyde A. May enlisted and joined the 30th Michigan regiment where by 1900 he was stationed in Atomonan, Philippines, some 100 miles southeast of Manila. May served for nearly four years as a courier and saw combat against the native insurgents who were looking to oust the United States.

In 1906, Clyde May joined the Los Angeles Police Department and was assigned to University Division, which was then located at 825 West Jefferson Boulevard. By then, his brothers and mother had also moved to Los Angeles, where Clyde’s older brother, Ora, also joined the LAPD. May’s military experience made him a capable patrolman and his commanding officer, Captain Avery J. Bradish, soon assigned him to work a night watch plain clothes detail in the southern part of the city. Following a rash of burglaries and street robberies in January 1907, Chief Edward Kern issued an edict, ordering patrolmen to stop and detain anyone out after midnight without legitimate business.

The early morning of February 3, 1907, was cool and cloudy by Los Angeles standards, as temperatures dipped into the lower forties and a light wind swept across the city. Around 12:45 a.m. Patrolman May and his partner John M. Hoover walked eastbound on Adams at San Pedro Street, when they observed a man later identified as William J. Ross walking westbound from Central Avenue. Ross closely matched the description of a burglary suspect who together with a cohort had been loitering on the porch of a citizen’s residence at 222 East Jefferson Boulevard some two hours earlier. As Ross drew nearer, Patrolman May pulled back his overcoat and flashed his star shaped badge while identifying himself as a police officer.

Patrolmen Hoover and May asked the suspect what he was doing out in the early hours of the morning. The suspect angrily replied that his name was Ross and he was coming from around the corner. Without warning, Ross stepped into the street and armed himself with a revolver he had carried in his coat pocket. As May tried to seize the revolver, Ross broke away and quickly fired a shot that struck May at the base of his neck just atop his left shoulder. As May fell, Ross turned towards Hoover and fired two more rounds. Hoover deftly ducked and drew his own revolver firing twice at Ross. One of Hoover’s shots caught the would be cop killer squarely between the eyes,leaving Ross dead before he fell to the ground.

The shooting occurred directly in front of the 3rd Presbyterian Church, whose original building is still in existence at 665 East Adams Boulevard. A citizen heard the gunfire and came running to investigate. He later stated that as he charged to the scene, a second individual ran by him and jumped on-board a passing street trolley. Police surmised that this was Ross’ partner in crime. May was seriously wounded but awake. He was transported to Clara Barton Hospital then located at the intersection of Olive and Pico Boulevard. Surgeons worked through the morning and prolonged May’s life, as they desperately sought to find the wayward bullet that had gravely injured Patrolman May.

The suspect was later identified as William J. Ross, from Kansas City, Missouri. Ross was from a good home and his father was a justice of the peace. Ross was a trained carpenter and cabinet maker who had arrived in Los Angeles the previous year. He took to drinking in the saloons that littered east First Street and his life spiraled downward from there. In his pocket, police investigators found twenty cartridges and a rolled up felt hat. At the time of his death, Ross wore a small cap on his head and two different shirts. Police noted he could easily change his appearance with the change of hats and removal of one shirt. Lastly, they found a skeleton key that would open most simple door locks.

May was young and vibrant. As his health improved over the next week, May was sent home to his south Los Angeles residence to recover.For several weeks May’s health seemed to improve. As February wound down, May’s condition suddenly worsened and he was hospitalized with severe abdominal pain. Doctors took X-rays of May hoping to find the bullet, but their efforts were futile. May’s condition worsened and he died on February 28, 1907, twenty-five days after being shot. His brother Patrolman O. H. May, brother Charles H. and new wife Dolly were at his bedside when he died.

Clyde A. May was 27-years-old at the time of his death. His service was held at Pierce Brothers Funeral home on south Flower Street. Fifty uniformed officers led the procession and the wagon carrying the dozens of floral arrangements, was said to have been overburdened by the flowers’ weight. May’s pall bearers included Captain Walter Auble, a former chief of police, who would also die in the line of duty in September 1908. Joining Auble was Captain Avery J. Bradish, May’s commanding officer along with Lieutenants William Murray and George Williams. An additional hundred uniformed officers dressed in their dark uniform coats and stove pipe patrol hats followed behind the hearse.

The procession proceeded from Flower and Seventh Streets to north Broadway, where it continued to First Street. There May’s body was transported to Evergreen Cemetery. At graveside, a firing squad from the California National Guard gave the Spanish American War veteran a gun salute. A bugler somberly played Taps as the afternoon faded away.