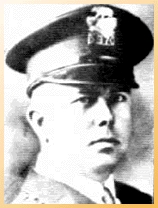 Policeman Pritchett was shot and killed while at the scene of a domestic dispute.

The suspect later stated that he had gone to the business and planned on committing suicide in front of his wife.