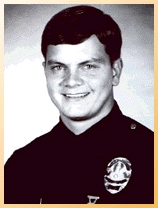 Officer Kubly was shot and killed by a robbery suspect following a short vehicle pursuit. Officer Kubly had attempted to stop the vehicle after observing it run a red light. The suspect led Officer Kubly on a pursuit which ended when the vehicle crashed into a business.

When the suspect emerged from the wreck he opened fire on Officer Kubly, striking him once in the chest. Officer Kubly was transported to a local hospital where he succumbed to his wounds a short time later.

The suspect was apprehended 9 hours after the shooting. The ensuing investigation revealed that the suspect had stolen a car and had committed several other robberies earlier in the day. He was found guilty of murdering Officer Kubly and sent to prison.

Officer Kubly had served with the Los Angeles Police Department for 18 months. He was survived by his wife, parents, and three sisters. He is buried at Forest Lawn Memorial Park in Glendale.