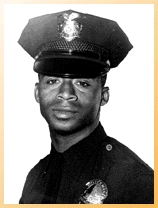 Policeman Riddick was shot and killed when he attempted to arrest a bank robber while off duty.

The robber entered the bank carrying a small black bag and went up to a teller and held her up with a .38 revolver. On his way out, he shot the uniformed guard standing by the door, in the chest without warning. The guard was unaware that a robbery had occurred.

Policeman Riddick, in civilian clothes, was in the bank cashing a check. He followed the robber out to the parking lot. The bandit was getting into a 1968 brown Pontiac Firebird. According to witnesses, Policeman Riddick ordered him out of the car with his hands up. The bandit turned and fired, hitting the officer. The officer fell to the pavement, but managed to fire his weapon and shot out the rear window of the bandits car.

The bandit was later shot by another officer when he fired at him. The bandit’s gun was tied to other murders and he had been arrested 18 times for various offenses and had been paroled prior to killing Policeman Riddick.

Policeman Riddick was survived by his wife.