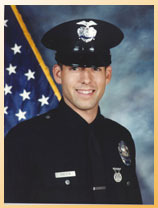 Officer Cuesta was shot and killed as he sat in his cruiser while waiting for backup units at a large party. Shots were fired on the officers from behind their vehicle and one bullet struck Officer Cuesta in the head. Officer Cuesta’s partner was able to return fire. Several suspects were detained for questioning and in the ensuing investigation, a shooter was identified and later convicted and sentenced to life.

Officer Cuesta is survived by his wife and two young daughters, ages 18 months and 4 weeks.