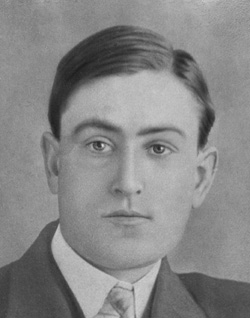 As 1911, wound down, Angelenos readied for the holiday season. Business was brisk at the downtown shops along Broadway and Spring streets. The chief of the Los Angeles Police Department, Charles E. Sebastian celebrated his appointment for an additional year as chief. Despite this festive mood, 1911 had been the bloodiest year on record for the police department, with the deaths of three patrolmen in the line of duty: Arthur B. Crusey, Cecil S. Bowman and James P. Wylie. William H. Taft had succeeded Theodore Roosevelt as president and Floyd C. Eiler was completing his second month as a patrolman for the LAPD.

Floyd Charles Eiler was born on December 20, 1885 in Miami County, Kansas, to Daniel and Louisa M. Eiler. The elder Eiler owned a farm in Liberty, Decatur County, Kansas. Floyd was one of at least six children born to the couple. By 1910, the elder Eiler had passed away. Floyd and his older brother Roy made their way to Los Angeles, where they shared a room at 211 East 5th Street. The close knit brothers both earned a living as drivers. By early October 1911, Floyd lived at 300 East 25th Street. He sent for his mother Louisa M. and younger sister Ada C. Eiler and the two joined him in Los Angeles. On October 25, 1911, Floyd C. Eiler joined the LAPD and was assigned to work Central Division.

In these early days of the Department, officers were on probation for six months. However, they generally manned a foot beat alone. Patrolman Eiler’s foot beat was on First Street, east of Alameda around Hewitt and Garey Streets. It was here he worked on the evening of December 21, 1911. The area was littered with saloons and pubs, which then as now, could attract an unsavory element.

Fred Winsch was said to have originally been from New Orleans. However, he had made his way to San Francisco where he met up with Luigi Colondoni. Together the pair traveled south to Los Angeles where they roomed at the Garey Hotel which was located near the corner of 2nd and Garey Streets. There, they drew out a scheme to commit street robberies along with heists of small local businesses.

On Thursday, December 21, 1911, the two set about on their evil mission and went to a sporting goods store where they purchased a .38 caliber Colt revolver. Later that night, Winsch and Colondoni went to Billy’s Chop House located at 1st and Garey Streets intent on robbing the establishment. However, the bungling pair was unorganized as Colondoni moved behind the counter prematurely angering an unprepared Winsch, who in turn clubbed Colondoni over the head for his hastiness.

Colondoni suddenly got cold feet and fled out the front door with Winsch in tow. The now infuriated Winsch drew his revolver, aimed and fired several shots at his fleeting partner, striking Colondoni once in the right thigh. Colondoni collapsed groggy and grazed by the reckless and merciless Winsch.

Patrolman Eiler heard the shots ring out on that cool windy evening. He responded eastbound from Hewitt and 1st Street directly into the path of Winsch who had approached from the opposite direction. Winsch fired suddenly at Eiler striking him just below the heart. Eiler fell back and though gravely wounded, drew his own revolver and shot back. Eiler’s round struck the fleeing Winsch in the small of the back. The bullet traversed Winsch’s back, passed through several vital organs and lodged just underneath the skin on his abdomen wall. Winsch collapsed as well and all three men lay on the ground seriously wounded.

Patrolman Eiler was well known in his beat and several citizens came to his aid. A friend of Eiler named James Martin came to his side and took his revolver. He approached Winsch and promptly fired another round into him as he was still armed with his Colt revolver. Sergeant Harry L. Varey and Patrolman R. J. McCarren responded to the shooting and took the two suspects into custody. Backup, comprised of two vehicles and several police officers responded from Central Station, located on the south side of First Street just east of Broadway.

All three men were transported to Central Receiving Hospital on First and Spring Streets for medical attention. Patrolman Eiler identified Winsch as his assailant. Surgeons then made a desperate attempt to save both Eiler and Winsch, who gave a dying confession admitting to shooting Eiler. Winsch died early the next day, as Eiler fought desperately to survive the serious gunshot wound to his chest.

As Christmas Day arrived Chief Sebastian issued a proclamation to the officers of his department, thanking them for their service. Then as now, police officers worked that holiday as the community enjoyed the three day weekend. Meanwhile, Floyd Eiler’s family consisting of his brother Roy, mother Louisa and sister Ada kept vigil at his bedside at the Hospital of the Good Samaritan, located at 924 West 7th Street. Doctors at the hospital later stated they had never seen someone fight so desperately and bravely as Eiler had. Despite his heroic effort,

Patrolman Eiler succumbed to his wound on the evening of Christmas 1911.

Luigi Colondoni, Winsch’s accomplice, was a suspect in the shooting of Patrolman Bernard C. Croft earlier in December 1911. Although Croft survived his wounds, he was unable to identify Colondoni as his suspect. Records for the time period do not specify what became of Colondoni.

Three days later, services were held for Patrolman Floyd C. Eiler, who became the eight Los Angeles police officer killed in the line of duty. The mortuary home of Orr and Booth located at Hope and 12th Street conducted the services. Eiler was taken to Angelus-Rosedale Cemetery, located at 1831 West Washington Boulevard, Los Angeles where he is buried today. Eiler’s family remained in Los Angeles, where his mother lived to the age of 101 before dying in 1959.