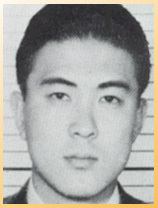 Officer Murakami was shot and killed while he and his partner answered a call of a disturbance. As the officers approached the apartment, the suspect opened fire on them, striking Officer Murakami. The other officers on the scene returned fire, killing the suspect. Officer Murakami died on the operating table about an hour after the incident.

Officer Murakami had graduated from the police academy the previous Friday. He was survived by his wife.