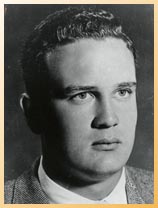 Detective Sergeant Nash was shot and killed in a gun fight with two robbery suspects. He was hit five times as he and his partner entered an apartment where the suspects were hiding. The officers managed to return fire critically wounding one suspect and seriously wounding the other.

Both suspects were convicted of second degree murder and sentenced to 5 years to life on August 18, 1959.

Detective Nash was survived by his wife and 2-year-old daughter.