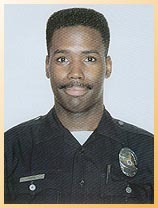 Officer George Rose succumbed to a gunshot wound received nine years earlier after being accidentally shot by a fellow officer.

Officer Rose was walking to his police car in the department parking lot when a woman came to the department seeking protection from her abusive husband. The husband followed the woman and opened fire on everyone in the parking lot. Officers returned fire. The suspect was taken into custody and booked for attempted murder. Officer Rose was found next to his patrol car a short time later. He had been struck in the head by a stray bullet which was later determined to have been fired by another officer.

Officer Rose never recovered and remained under doctor’s care at a rehabilitation center for the next nine years until his death.

Officer Rose had been employed with the Los Angeles Police Department for three years at the time of the shooting. He is survived by his wife.