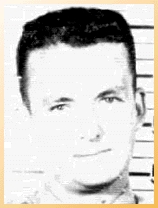 Policeman Campbell was shot execution style and killed after he and his partner were abducted by two suspects during a traffic stop. The officers were on patrol when they began to question the men. One of the suspects pulled out a gun and was able to disarm the officers. The two men drove the officers to a field where they shot Policeman Campbell. The second officer was able to flee the scene and was not injured. The shooter suspect was sentenced to death but later had the sentenced commuted to life. The accomplice was also sentenced to life in prison.