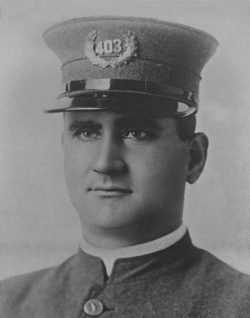 In 1901, the Pacific Electric Railway was established in Los Angeles, California, by Henry Huntington. Since the mid-1870’s, horse drawn trolley cars began carrying passengers around the area of Spring and 2nd Streets. By 1914, the electric powered Red Cars ran in all four directions from downtown Los Angeles, including eastbound to San Bernardino and in a southern direction to Santa Ana, California. It was such a street car that struck Patrolman James F. Crehan on March 31, 1914, and ended his life at Long Beach Avenue and Twenty-Second Street.

James F. Crehan was born in Wallacetown, Ontario, Canada on June 1, 1881. On January 2, 1905, he left Canada for good via the Michigan Central Ferryboat, arriving in Detroit, Michigan on the same day. Crehan made his way to Los Angeles, California by April 1906, where he found work in the plumbing trade and worked as a pipe fitter.

By 1910, James had married Josephine A. Ball and adopted her eleven-year-old daughter. The family lived at 506 Francisco in what was then the city of Redondo, but what today is Manhattan Beach. Eventually, the family moved to 1741 East Twenty-Second Street, just east of Long Beach Avenue, in Los Angeles.

On February 1, 1913, Crehan became a Los Angeles police officer. On the afternoon of March 31, 1914, he finished his shift and headed home. As he attempted to cross the tracks along Long Beach Avenue, through which the Metropolitan Transit Authority Blue Line now runs, Crehan waited for a northbound Los Angeles train to pass. As the train continued, Crehan stepped onto the tracks and was immediately struck by a southbound two car Red Line headed for Santa Ana and was killed instantly, some five hundred feet west of his residence.

James F. Crehan’s service was held at St. Patrick’s Catholic Church, which is now located directly across the street from Newton Police Station, but was then situated at 1032 East Thirty-Fourth Street on the current church’s common ground. He became the second officer to die as a result of a collision with a street car. Crehan was buried at Calvary Cemetery located at 4201 Whittier Boulevard, in East Los Angeles.