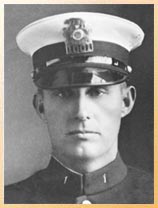 Policeman James Carter was shot and killed while searching two suspects. As he searched the first suspect the second man stepped back and shot Policeman Carter.

Despite being mortally wounded Policeman Carter returned fire and pursued the suspects until he collapsed.