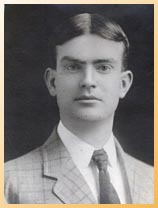 On the morning of November 27, 1911, James P. Wylie was reporting for duty at the old Central Station, which was located at the southeast corner of First and Broadway Streets. At the time, Wylie served as the crossing officer at First and Main Street, where today’s Police Administration Building (PAB) and City Hall are now located.

Wylie had just finished his breakfast on Spring Street and was reporting for Day watch around 9:00 a.m. As Wylie crossed Spring Street between Sixth and Seventh Street, he failed to see a coach traveling southbound on Spring. Wylie was struck and rendered unconscious. The force of the coach’s impact caused paralysis to Wylie’s left side. He held on tenuously to life through the day but would succumb to his injuries later that evening.

Officer Wylie was 29-years-old when he died. He was the seventh officer killed in the line of duty and the first to die as a result of a traffic collision with a motor vehicle.