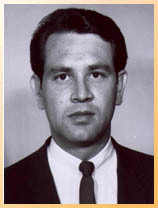 On August 19, 1969, Hollenbeck Area Policeman Jerry Maddox was assigned to patrol in the Pico Gardens Housing Project. Policeman Maddox stopped to investigate a large party, which was attended by 18 to 24 youths. As the officers approached the location, one of the party goers ran from police. Policeman Maddox chased the suspect down a narrow driveway and while handcuffing the suspect he was shot in the back and died. Responding officers arrested the suspect at the scene.