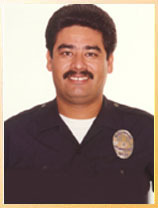 Officer Rios succumbed to injuries sustained seven months earlier while on bicycle patrol in the Hollywood area. On May 27, 1992, he struck an automobile which exited a parking lot into his path. Officer Rios sustained a cerebral concussion which contributed to his death eight months later of a massive seizure and cardiac arrest.