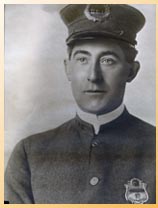 Sergeant Toolen was shot and killed while he and another officer were attempting to arrest an auto theft suspect. They had received information about the suspect’s location and then went to the man’s home to arrest him. As the officers spoke with the suspect’s mother the man came down the stairs and opened fire on the officers, fatally wounding Sergeant Toolen. The suspect fled but was apprehended a few days later.

Sergeant Toolen had been with the Department for nine years.