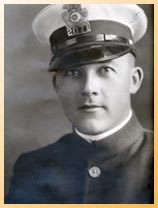 Policeman Wicks succumbed to gunshot wounds sustained the previous day. He had responded to a domestic disturbance call in which a man had assaulted his wife and son. When he arrived at the scene, the man shot him twice in the abdomen. Despite being mortally wounded, Policeman Wicks returned fire and killed the suspect.

Policeman Wicks had served with the Department for 3 years. He was survived by his wife.