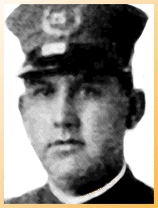 Unlike many of the police officers from LAPD’s early history, Joseph J. Romero was a native Angeleno. His father Jose Romero was born in San Diego around 1852 and moved to Los Angeles as a young man. By the mid 1870’s, the senior Romero worked as a ranch hand breaking in horses near downtown Los Angeles. In his mid twenties he met and married Modesta Carrasco, who was also a native Californian. The Romeros moved about several times before eventually settling down at 118 Alta Street, which would have been in East Los Angeles, in the area of Cesar Chavez Avenue and Soto Street. Joseph J. Romero was born to the couple on June 11, 1884.

Joseph J. Romero joined the Department on December 28, 1910. By September 1918, Romero was married and living at 532 Huntington Drive. As a police officer, he was exempted from the Great War which the United States entered that same year. He remained with LAPD during the war working as a jailer. In September 1919, with World War I winding down, Joseph worked the “Flying Squad,” which were quick response units equivalent to today’s “Z” cars responding to hot shots. On September 23, 1919, the 34 year old Romero was partnered with Inspector Hubert M. Kittle, today’s equivalency of commander. The pair had just completed an investigation at the business of Woods & Melienry, a dry goods establishment. They were on a follow up with one of the proprietors, G. H. Woods, heading for a substation in Chinatown, which was then in the area of today’s Olvera Street.

Kittle was driving a 1915 Ford with Romero in the front passenger seat and Woods in the back seat. As the trio traveled southbound on Main Street at 15 miles an hour, Kittle made a quick left turn left onto Marchessault Street, a street lost to history, but which was approximately where Cesar Chavez Avenue is today. Tragically, a trolley was headed north on Main Street just as Kittle completed his turn. The trolley collided with the passenger side of the Ford machine (as automobiles were called in those days). The collision crushed the Ford and the impact threw Kittle under the steering column, while Romero was hurled into the rear compartment. Woods was killed instantly and Romero sustained major internal injuries. He was transported to Receiving Hospital, at the corner of Spring and First Street, along with Kittle.

Patrolman Romero languished from early Monday morning through the evening hours. The police surgeon, whose primary assignment was treating injured officers or prisoners requiring medical attention, tried desperately to save Romero’s life. Despite this, Romero succumbed to his injuries. Kittle survived but his injuries, including a broken hip were more serious than originally thought. Initially, the streetcar motorman was detained for manslaughter. An investigation by Detective Sergeants Taylor and Bowe, followed by a coroner’s inquest, determined that Kittle was probably at fault and the motorman was released without any charges.

Patrolman Joseph J. Romero was three months shy of his thirty-fifth birthday when he died. He became the first officer of Hispanic descent to be killed in the line of duty in LAPD history. He was survived by his wife, parents and several brothers including Edward J. Romero, Serial No. 1741, who served on LAPD from 1921 to 1941. Joseph Romero was buried at Calvary Cemetery in East Los Angeles, where his gravestone may be found online.