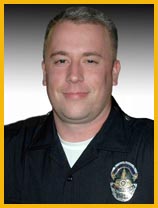 Officer Landon Dorris was struck by the driver of a vehicle while conducting a traffic accident investigation at the intersection of Riverside Drive and Hyperion Avenue at 1:25 am.

He was seriously injured and taken to University of Southern California Medical Center, where he died several hours later.

Officer Dorris had served with the Los Angeles Police Department for 3 and a half years and had previously served for 6 years with the California Highway Patrol. He is survived by his wife, two children, mother, and two sisters.