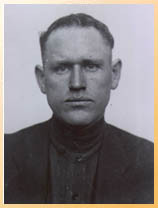 Policeman Bunch was shot and killed by a robbery suspect.

Because of World War II, tires were rationed and cars were being stolen and stripped of their tires and abandoned. The Detective Inspector thought that these thieves would have a lot of money and might go to Gardena to gamble; draw poker being legal there. Policeman Bunch was working undercover in a poker club because he was a good poker player and probably knew more car thieves and car prowlers than anyone in the department.

Shortly after midnight three holdup men entered the club armed with a semiautomatic 12 gauge shotgun and revolvers.They lined up the fourteen customers and employees with their faces against the wall and as one suspect covered them with the shotgun the other two suspects started to search the victims.

Policeman Bunch was the fifth person in line from where the search was started. He carried his .38 in a shoulder holster. Probably knowing that he would be identified as a police officer, Policeman Bunch drew his gun, whirled and fired at the man holding the shotgun, hitting him in the belly and knocking him back on his haunches. As he hit the floor, he fired two shots from the shotgun. The first went high, but the second struck Policeman Bunch in the head, killing him instantly. The bandits fled to their getaway car. They drove around for awhile and knew the injured suspect had to have medical attention. They finally dumped him out in a hospital driveway. The injured robber died the next day, but before he did, he implicated the others.

The other two robbers plead guilty and were sentenced to die. The driver, who had been unarmed, was given a life sentence. Later, the death sentences were changed to life sentences, on the grounds that their attorney caused them to plead guilty with the belief that they would receive life sentences.