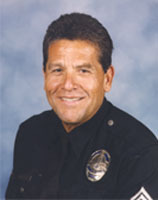 Officer Villalobos was awarded the Medal of Valor in 1999.

Officer Villalobos had been with the Los Angeles Police Department for 29 years, and had been a member of the SWAT team for 17 years. He is survived by his parents and four children.