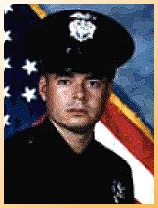 Officer Navidad was shot and killed after he and his partner were flagged down by a 7-11 clerk who told them a man had just stolen a 12-pack of beer. The two officers spotted the man in an alley and as they approached him he pulled out a gun and shot at them while they were still in their patrol car, striking Officer Navidad. His partner was able to return fire and killed the suspect.

Officer Navidad is survived by his wife and two children.