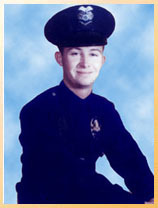 Officer Edwards was shot and killed execution style after being abducted by unknown assailants. He was last seen leaving the police academy on May 10, 1974. His handcuffed body was found the next day in an abandoned apartment building. The case was never solved and remains open with the Los Angeles Police Department.