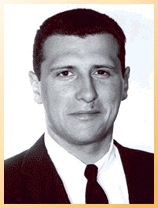 Policeman Michael Parker was killed in an automobile crash at the intersection of Sunset Boulevard and North Alvarado Street while pursuing a motorcycle that was believed to have been stolen.

The driver of the motorcycle suffered critical injuries and was subsequently charged with manslaughter.

Policeman Parker had served with the Los Angeles Police Department for four years. He was survived by his wife, Mary,  11-month-old daughter, Tresa, mother, and two sisters.