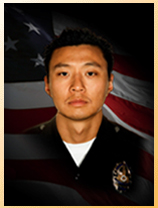 Nicholas Choung Lee was born on August 16, 1973 in Seoul, Korea and moved to the United States with his parents Heung Jae Lee (father), and Choung Ja Lee (mother) when he was six years old. Nicholas has a younger brother Danny and a sister, Jenny. Nicholas was raised in Koreatown, Los Angeles, California. Nicholas graduated from University High School, Los Angeles in 1991 and attended California State University Fullerton where he graduated in 1996.

Nicholas met Cathy Kim and they married in May 2001. Their first daughter, Jalen, was born in April 2000, followed by daughter Kendall in November 2007. Nicholas loved his girls and would go scootering with the girls as he took them to school. Nicholas loved barbecuing and serving family and friends. Nicholas was a loving father, husband, and a great provider. Nicholas ensured his family came first in all aspects of his life.

Nicholas Lee joined the Los Angeles Police Department on August 31, 1998, a member of the 8B-98 Class. In March 1999, Officer Nicholas Lee completed his academy training and was transferred to Van Nuys Division. Nicholas completed probation at Van Nuys and transferred to Hollywood Division where he worked patrol.

Nicholas was an exemplary police officer and received numerous awards and commendations for his work ethic, professionalism and compassion. In addition to the many Department commendations, Officer Nicholas Lee was the subject of myriad Citizen Commendations. On July 10, 2004, Officer Lee was commended for helping a stranded motorist by pushing her car two city-blocks to a gas station where he waited till help arrived; On September 7, 2005, Officer Lee was commended for his dedication and compassion in the search and location of a missing child; On January 25, 2006, Officer Lee put an end to a crime spree by taking two narcotic suspects off the streets.

“Nick was a great cop. His hard work, dedication and leadership helped mold young police officers into law enforcement professionals,” said Chief Charlie Beck. “Nick’s death is a great loss to our police family, all of law enforcement and the residents of Los Angeles. The LAPD is forever grateful for the 16 years he spent protecting our great City. I send my most sincere thoughts and prayers to his wife, two daughters, and the entire Lee family.”