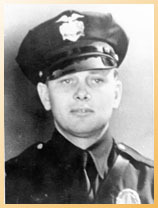 Policeman Huseman succumbed to gunshot wounds received ten days earlier when he and two other officers responded to a disturbance call. The call involved two men arguing over the ownership of a baby carriage on Enterprise Street in which one of the men drew a gun. When the officers arrived they demanded the suspect surrender but he opened fire, wounding all three officers. The suspect was also shot and wounded.

Policeman Huseman was survived by his wife and four children.